Last night I stumbled across a 1985 Soviet adaptation of The Hobbit:

Like the 1977 Rankin-Bass adaptation, the entire thing is squeezed into just over an hour (*cough* Jackson padding *cough*), but unlike Rankin-Bass, which only cuts Beorn and the Arkenstone, this one makes some quite unique stylistic choices. The Trolls and the Eagles are reduced to a dream, and never mind Beorn – there are no Wood-Elves!

What the film has going for it is the overwhelming concentration on Bilbo, and the idea that this is a smug, overweight 50-something going on a fairy tale adventure, rather than anything epic. No way could this Hobbit be associated in any way with The Lord of the Rings (probably just as well in this case, since Rings was banned in the Soviet Union until 1988). The Ring is just a random plot device that plays second fiddle to Bilbo himself. Gandalf is a glittery trickster figure, and even Thorin is barely given any focus beyond being “Mr Exposition Dwarf”. Bombur isn’t even fat. 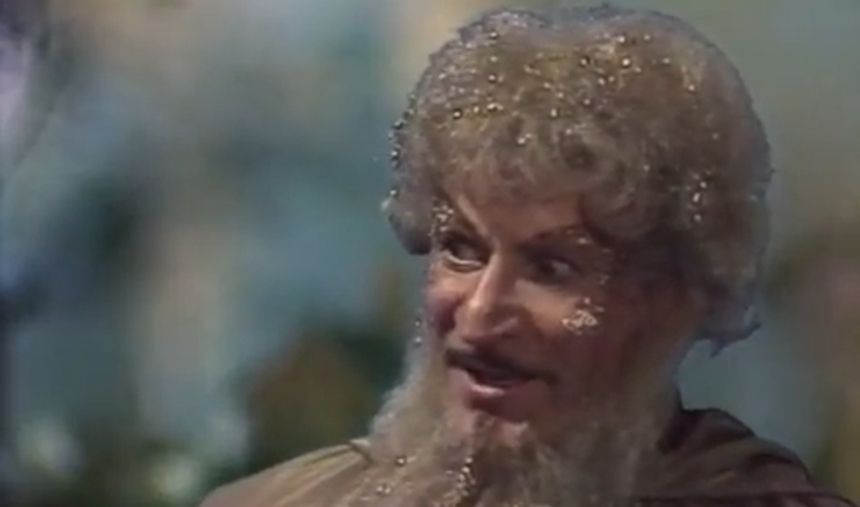 In terms of this being a fairy tale, we have a much more extensive Riddle Game than we saw in Jackson, with most of the book riddles (apart from the Time one) making an appearance. The ordering is a bit odd though – why would Bilbo struggle over fish when he’s asked the fish on the table riddle?

The goblins and the men of Lake Town are most notable for their dance routines (the goblins here are humans in robes). Bilbo saving the Dwarves from the tree-spiders (not Mirkwood spiders!) is actually treated with a similar whimsy to the book. If anything, it is more whimsical. Meanwhile, the sort of thing Jackson likes to focus on (the Battle of Five Armies) is reduced to a couple of minutes of narration.

So yeah – while it is overall inferior to Rankin-Bass, I think the Soviet Hobbit is worth watching if only for the sheer theatrical oddness. If I was drawing an analogy here, think the BBC’s old 1976 adaptation of The Snow Queen, but cheaper and with more dancing, and you wouldn’t be far wrong.

(Note – there is another version floating around with joke English subtitles. The one linked above features the actual subtitles).

Addendum: I really hate it when the Copyright Orcs purge obscure material from the public domain – it’s not as if the Soviet Hobbit is available in any other format. Luckily, I have found this version:

Alas, the only subtitles are Russian ones, but assuming you know the story anyway, it’s better than nothing.