Representations of Gollum on Screen

Tolkien’s Gollum is one of his most memorable characters, and this memorability is reinforced by the character’s distinctive appearance. Denethor and Feanor have their idiosyncrasies, yes, but both look normal. No-one could suggest the same of Gollum, with his six teeth and webbed feet. While I do intend to eventually post a wider Gollum analysis, today I thought I would take a look at how the adaptions handle him – it is all very well to throw up vague literary descriptions (and Tolkien’s writings are often a bit shadowy here), but the screen does not have that luxury. How, then, to visually capture this weird and elusive figure…

There are eight screen Gollums of which I am aware, not counting pre-Ring Sméagols. Alas, I have only seen seven of them, since the Jackanory BBC adaptation of The Hobbit (1979) has never been released again, so far as I know.

Considering that they couldn’t even get his name right, and that the film barely counts as a Tolkien adaptation, the 1966 Gollum might be my favourite representation. He’s extremely creepy, in a mad and twisted sort of way – rather than being the sort of pitiful creature one associates with the character in The Lord of the Rings, he’s something one would want to run away from. Fast. Seriously, Snyder missed an opportunity by cutting the Riddle Game. Exchanging riddles with this Gollum – can you imagine being eaten by this thing – would traumatise anyone. 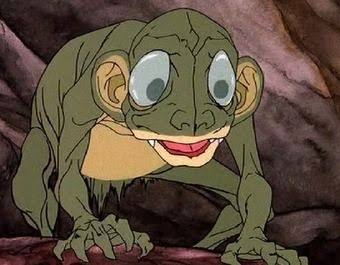 The 1977 Rankin-Bass Hobbit remains the best adaptation of the book, but Eru alone knows what the animators were doing when they turned Gollum into a frog monster. Sure, he lives around water… but in contrast to the 1966 Gollum, I genuinely don’t look at this creature and think of him as a fish-obsessed cannibal. I imagine him eating insects.

This Gollum reappears in Rankin-Bass’ The Return of the King (1980), where things are even worse. A frog monster with the Ring might serve in The Hobbit, where he is just that. A monster. The Gollum of The Return of the King is supposed to be a pitiable deformed proto-hobbit… but no amount of Ring-induced corruption could conceivably turn a hobbit into this. While I do personally prefer a weirder look for the character, this Gollum is simply too non-human to communicate what should be a key theme. 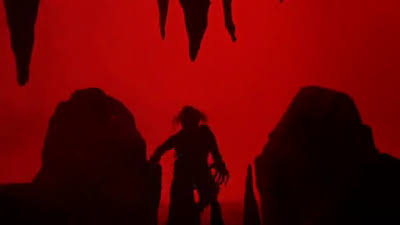 This Gollum is only seen in the prologue section of Ralph Bakshi’s The Lord of the Rings (1978), and we only see his (shadowy) human actor, rather than the rotoscoped animation. It’s also a very brief appearance, so there is not much to comment on, beyond my sense that this Gollum resembles a Morlock from George Pal’s 1960 adaptation of The Time Machine: 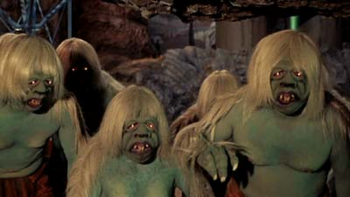 Considering that the Morlocks are cannibal humans deformed by millennia of living in underground caves, this would be highly appropriate. 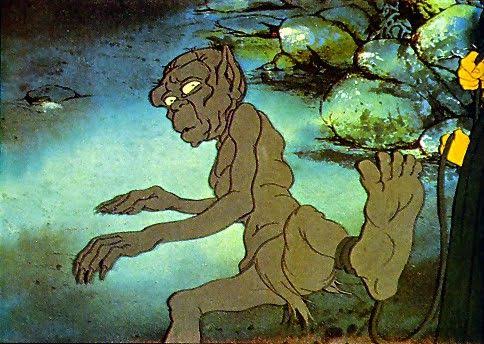 One of these days, I might get around to looking at how Peter Jackson’s The Lord of the Rings borrows from Ralph Bakshi’s 1978 effort. One of these borrowings is the portrayal of Gollum, where we see him as deformed humanoid in a loincloth.

In contrast to Snyder or Rankin-Bass, this one is actually supposed to be pitiable, rather than monstrous. Following on from the prologue variant, one could definitely imagine this Gollum as an ex-hobbit, which makes him fine for his role in The Lord of the Rings – he’s simultaneously a study in redemption, and a warning about the power of the Ring. On the other hand, this still isn’t as Tolkien imagined him (we’ll get to that), and he feels insufficiently threatening. Gollum may be pitiable, but he is also a mentally-disturbed cannibal. 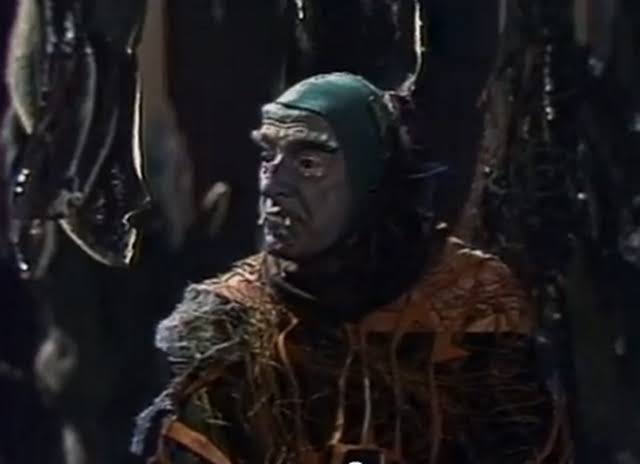 Yes, the Soviets took a stab at The Hobbit. Since The Lord of the Rings was off-limits via being banned, they were left with the monstrous, scary version from The Hobbit. And this one fits the bill, I think: he’s very much something out of a fairy tale, while simultaneously being more believably threatening than most of the other Gollums (apart from my precious Snyder, of course).

On the other hand, he manages to look more like a goblin than the production’s actual goblins (who are simply humans in robes), and the fish thing is overdone. Gollum likes fish, but he’s not turning into the Creature from the Black Lagoon. 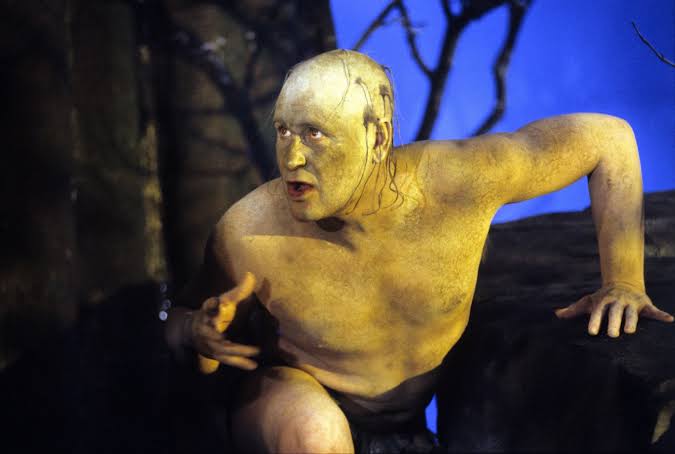 Move over Peter Jackson: the Finns did a live-action adaptation of The Lord of the Rings first. This Gollum (‘Klonkku’) doesn’t have the benefits of CGI, however, and since he’s played by the same actor who plays Aragorn (Kari Väänänen), this means a Gollum who is a good deal more well-fed than you would normally expect.

He’s got the Bakshi loin-cloth thing going, of course, and definitely manages to feel both pitiable and insane. Of all the Gollums in this list, this is the one you could imagine as an escapee from a mental asylum. He’s not a monster in the way that the Soviet Gollum is, but you really wouldn’t want to be alone with him… 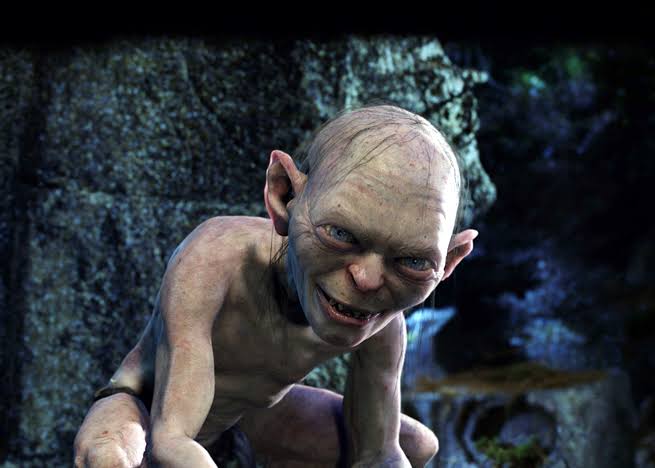 The now-iconic Andy Serkis Gollum. Small, malevolent, and deformed, there is something childlike about the Jackson Gollum, something that evokes a demonic changeling. Which is a decent enough interpretation – he’s both pitiable yet unholy. Bonus points also for the very well done transformation sequence, which conjures up something worthy of Poe.

On the other hand, as with Bakshi, the Jackson Gollum is more appropriate for The Lord of the Rings than The Hobbit, where he is largely reduced to making the audience feel clever (“we know more about this creature than Bilbo does, because we’ve already met him”). Oh, how I wish we’d got the Del Toro Hobbit instead…

This Gollum, of course, wears the Bakshi loincloth, which means that the garment is pretty much associated with the character now, even though it’s not an original invention of Jackson, nor actually how Tolkien imagined the character.

Which actually begs the question – how did Tolkien imagine Gollum, and what was the character actually wearing in the book?

It turns out Tolkien presents multiple differing descriptions of the character – Gollum is, at turns, described as both black and pale. However, the conundrum is resolved in an unpublished essay. Gollum wore conventional (black) clothes over pale skin:

Gollum was according to Gandalf one of a riverside hobbit people – and therefore in origin a member of a small variety of the human race, although he had become deformed during his long inhabiting of the dark lake. His long hands are therefore more or less right.* [*Not his feet. They are exaggerated. They are described as webby (Hobbit 88), like a swan’s (I. 398), but had prehensile toes (II 219).] But he was very thin – in The L.R. emaciated, not plump and rubbery; he had for his size a large head and a long thin neck, very large eyes (protuberant), and thin lank hair . . . He is often said to be dark or black (II 219, 220 where he was in moonlight).

Gollum was never naked. He had a pocket . . . He evidently had black garments in II 219 & eagle passage II 253: like ‘the famished skeleton of some child of Men, its ragged garment still clinging to it, its long arms and legs almost bone-white and bone-thin.’

His skin was white, no doubt with a pallor increased by dwelling long in the dark, and later by hunger. He remained a human being, not an animal or a mere bogey, even if deformed in mind and body: an object of disgust, but also of pity – to the deep-sighted, such as Frodo had become. There is no need to wonder how he came by clothes or replaced them: any consideration of the tale will show that he had plenty of opportunities by theft, or charity (as of the Wood-elves), throughout his life.

Neither loincloth nor nudity in sight, though I would be very surprised if anyone will ever depict Gollum with pocketed garments.

Addendum: With the recovery of Khraniteli in March 2021, there is a further Gollum. Behold, the 1991 Soviet Gollum:

In contrast to the 1985 version, this one is less monstrous – probably because we see his transformation. Rather than a fanged cannibal, the 1991 Soviet Gollum bears an uncanny resemblance to Old Gregg from the Mighty Boosh. One wonders if he likes Baileys as much as the Ring.

He also has a very small screen-time, relative to the 1985 Gollum.

One thought on “Representations of Gollum on Screen”