Andrew Dagher has recently put out a couple of comparative literature essays, looking at J.R.R. Tolkien’s influences. The first looks at the potential influence of Dante Aligheri’s Divine Comedy on Tolkien’s The Lord of the Rings. Or at least Inferno anyway – as will be seen, it’s a crying shame Dagher didn’t go beyond the first book in his analysis. The second, and better, essay is Dagher’s look at Shakespeare’s Macbeth, and its influence on Rings, though, again, the essay would have been improved via a broader survey of Shakespeare. I had been meaning to write a response, but my involvement in the University of Otago’s German Language Production delayed me. Until now.

Starting first with the Dante essay… let’s be frank. Dagher, though undoubtedly well-meaning, stretches analogies to breaking point and beyond. The most useful point in the entire piece is a reminder that Tolkien was familiar with Dante – though even there, I would have thought the point obvious, based off Letter 294. The rest of it? Oh dear.

Dagher cites the passage in Inferno, where Virgil suggests that we should not pity the damned: “Here pity lives when it is dead to these. Who could be more impious than one who’d dare to sorrow at the judgement God decrees?” (Dante XX.28–30). Dagher then, with a straight face, attempts to draw thematic parallels with Tolkien’s Gollum, and how he is not to be trusted: “Perhaps the biggest lesson here is to not be so quick to forgive or pity the damned.”

Which, literally, is Dagher missing the entire thematic point of The Lord of the Rings.

Victory in the War of the Ring is not achieved through force of arms. It is not even achieved by inner strength – Frodo famously fails in his mission at the last moment. It is achieved via the Power of Mercy. Dagher focuses on Gollum’s betrayals, but ignores the fact that his intervention at Mount Doom saved Middle-earth, and only through the forgiveness imparted by Bilbo, Frodo, and Sam is the eucatastrophe made possible.

Honestly, if Dagher wanted to focus on the ill-effects of forgiveness in Tolkien, Saruman’s activities in the Scouring of the Shire would be a better bet. As it is, Dagher gets Tolkien’s message back-to-front. Tolkien may not embrace forgiveness in consequentialist terms (“do this because it helps you, or leads to a desirable outcome”), and via Saruman he shows that. But he certainly embraces it in deontological or virtue ethics terms, (“do this because it is a good thing to do, in itself”). 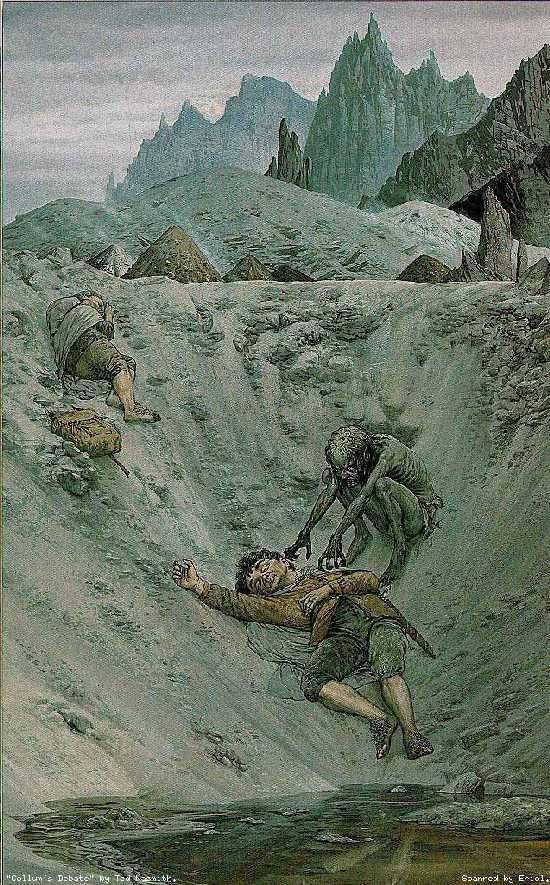 Not that Gollum is actually damned anyway. The key difference between Inferno and The Lord of the Rings (or a key difference…) is that the characters are all very much alive. Gollum is a living, breathing person, with the capacity to do good as well as harm, and it is not our place to damn him. Curiously, Dagher misses this distinction, even though Tolkien and Dante do actually dovetail on this point. Dante’s argument is that we should not question the damnation of souls, because to do so usurps God. Tolkien’s argument is that we should not prematurely damn people in this life, because to do so would be to claim God-like knowledge. “Do not be too eager to deal out death in judgement. Even the very wise cannot see all ends.” Tolkien and Dante aren’t so much contradicting each other, so much as talking about completely different things: one pre-death, one post-death.

Dagher follows up his thematic consideration with a look at plot similarities between Inferno and Rings: the notion of needing to pass through a Hell in order to get to Heaven (with a respective guide dropping out at the end of Hell). This is, again, a deeply flawed argument.

First off, a passage through the underworld – which Moria is – is a staple of the Hero’s Journey, and as such, long predates Dante. Nor is Lothlórien Heaven – it is not a goal, but rather yet another point on the road. Frodo vanishing off into the West for healing is far closer to Arthuriana or Kalevala than it is to the Divine Comedy, where Heaven is the end point unto itself. The Comedy cuts off as Dante views the face of God.

More importantly – and I would suggest that this also ties back to the themes of the respective works – is that Dagher never once mentions Purgatory. Going through Hell is not enough in Dante – before one can ascend to Heaven, one must pass through Purgatory (note that it is here, not Hell, that Virgil the guide leaves, which again breaks the Gandalf analogy). The funny thing is, a minor adjustment in Dagher’s premise would make for a much stronger argument…

If one envisages Mordor as Hell (its layout does not resemble Dante’s structured Hell, but let’s run with it), one could very well imagine Mount Doom as Purgatory. A place where sins are purged, and souls made pure. Not least because Dante’s Purgatory is a mountain, and we see souls cleansed of, for example, Pride when they climb it (Pride is purged via carrying great big boulders up the mountain. Remind you of anything?). Applying Dante to Rings, one could hypothesise Frodo going through Hell (Mordor), then being cleansed of sin (the Ring) at Purgatory (Mount Doom), thus making him able to visit Heaven (Aman). Bonus points for the fact that Frodo cannot cleanse himself of sin, however much he tries, but rather needs the divine to do it for him. This is still not necessarily the most useful way to interpret Tolkien, but it is a good deal better than anything in Dagher’s piece. A shame he only focused on Inferno – Purgatorio would have been a much better point of focus.

So that’s Dante. What of Dagher and his Tolkien/Shakespeare essay? To be honest, it is broadly uncontroversial, with his points about Great Birnam Wood and the Witch-King’s death being well-covered ground. I would note, however, that Glorfindel’s prophecy (from The Lord of the Rings Appendix A, not The Silmarillion) is “not by the hand of man will he fall.” This is commonly misread as “not by the hand of man can he fall” – there was nothing stopping a man killing the Witch-King, it was just that that wouldn’t happen (comparison point – Princess Diana died in a car accident. That doesn’t mean she was immune to bullets). I’d also suggest that Tolkien’s solution to the prophecy – Eowyn is a Man, not a man, and Merry is a man, not a Man – is far cleverer than Shakespeare’s caesarian cop-out. But that’s a matter of personal taste, and I agree with Dagher that Tolkien was “improving” on the perceived flaws of Shakespeare’s Macbeth. 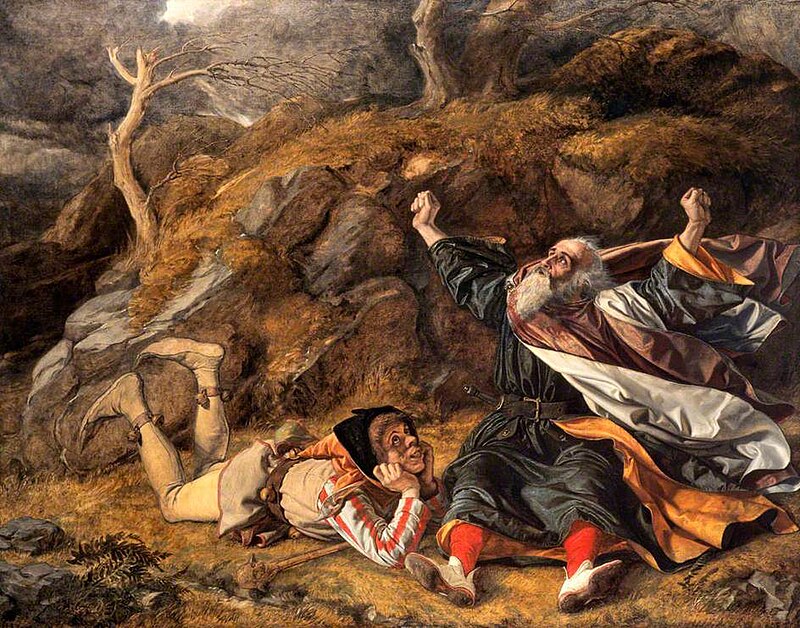 One area of Shakespearian comparison I wish Dagher had gone into was King Lear and Denethor. In short, King Lear divides up his realm for his three daughters, but (because he’s a fool, and easily deceived) favours the nasty elder daughters over the honest, loving daughter. Bad things happen, and Lear has to deal with the death of the ‘good’ daughter, Cordelia. He goes insane and dies. One can (sort -of) see parallels with Denethor/Faramir, and Lear/Cordelia (Peregrin Took as the honest Fool is stretching things, regardless of Gandalf’s line). It’s not a comparison that ought to be pushed too far, however – Boromir is far from being Goneril or Regan, and Denethor has genuine political reasons to distrust Faramir (he’s paranoid, not gullible). Bizarrely, as bleak as Denethor’s story is, it somehow ends up as less depressing than King Lear – though that’s not saying much – and Denethor is not defined by his poor judgement in the way Lear is. Make of that what you will, and while one could potentially argue that this was Tolkien “improving” Lear’s story in a more rationalistic direction, I’m not sure I’d make that argument.

That concludes my rebuttal of Dagher’s pieces. I don’t mean to be overly critical here, but when I feel a commentator has missed the point of a work, I feel obliged to point it out. And the Dagher Dante essay not only misses the point of The Lord of the Rings, but also passes up much more appropriate Dante comparisons. The Shakespeare essay, while not necessarily breaking new ground, is at least less problematic.

One thought on “Abandon Hope All Ye Who Enter Here: Tolkien, Dante, Shakespeare, and Andrew Dagher”