A New and Better World: William Morris and the Dawn of Modern Fantasy

Most of you probably know the modern fantasy genre didn’t start with J.R.R. Tolkien. Sure, he popularised and defined it… but he didn’t start it. Who did then? Well, here’s the thing. It really depends on what you mean by fantasy. Depending on how you define your frame of reference, there are multiple candidates. In fact, to steal a line from Overly Sarcastic Productions, sorting out exactly where the modern fantasy genre started is rather like playing a game of Cluedo:

Et cetera. And once one starts including children’s stories (Alice’s Adventures in Wonderland) and fantasy-tinged horror (The Picture of Dorian Gray), the possibilities skyrocket. The real problem, of course, is that there was no such thing as a distinct fantasy genre (outside fairy tales and traveller’s tales) in the minds of publishers and readers at this point. By definition you must categorise works based off criteria that didn’t exist when the author wrote their story. The creation of a new genre must, by paradoxical necessity, be anachronistic.

Or not, as the case may be. Modern fantasy – depending on the starting point – was arguably birthed as a conscious revival of late medieval romance… a dead genre returning centuries later in a new form. J.K. Rowling’s strange revival of the obsolete British Boarding School story was not the first piece of genre necromancy, and it turns out that a very solid candidate for the creator of modern fantasy is a certain William Morris, with The Wood Beyond the World (1894) and The Well at the World’s End (1896). Adult stories, set in a non-allegorical imaginary world, fused with supernatural elements… Morris loved himself some Malory.

Morris himself was a fascinating person. An energetic Victorian creative, he despised the soulless nature of modern mass production, and dedicated himself to reviving and honing the skills of traditional craftsmanship. Furniture, textiles… you name it, he did it himself. He and his wife were associated, too, with the Pre-Raphaelite artistic movement, with his wife often acting as a model for Dante Rossetti.

On top of this, Morris was also a committed revolutionary socialist, though his vision was less conventional nineteenth century Marxism, and more fourteenth century John Ball (“when Adam delved and Eve span, who was then the gentleman?”). The utopian vision Morris presents in News from Nowhere (1890) is actually pretty similar to The Shire. Indeed I like to think of Tolkien as a sort of Tory Catholic version of Morris – I suspect the notion of using the abandoned Houses of Parliament to store manure would have amused our Oxford Don. Oh, and Morris taught himself Icelandic in order to translate the Sagas into English, and Tolkien did see Morris’ poetry and prose as an early inspiration for his own writing efforts, so there is that too.

Anyway, I have just finished a read of The Wood Beyond the World and The Well at the World’s End, so I am in the fortunate position of being able to offer a review of those two books. That which lurks at the very dawn of fantasy, ere the coming of the cliches… (i) The Wood Beyond the World

Let’s be honest – the first modern fantasy novel is not a stunning piece of work. It’s an episodic series of adventures, written in Morris’ uniquely clunky archaic prose. The prose, unfortunately, is a take-it-or-leave-it matter with Morris, as it does not become any easier, and it really makes you appreciate the likes of Tolkien and E.R. Eddison for having the skill to make archaic prose pleasurable. Morris isn’t as bad as William Hope Hodgson’s The Night Land (1912), but that’s a very low bar. On the bright side, The Wood Beyond the World is significantly shorter than The Well at the World’s End, so I would strongly recommend starting with this one, flaws notwithstanding.

Leaving aside the prose, the plot isn’t great (things get a bit too convenient at points, especially in how the villain is dealt with), and the protagonist (Walter, a merchant’s son) is a straight Everyman. Why, yes, modern fantasy started out by putting very ordinary people in very extraordinary situations. But buried within the book are some truly interesting things:

First off, there are the influences. C.S. Lewis clearly found a fair bit of inspiration in The Wood Beyond the World, and not just for his wood between the worlds. The villain here was a clear influence for Jadis the White Witch, complete with a malevolent dwarf servant, while Walter the Everyman ends up a King, though not a prophesied one. Secondly, in rather un-Narnian fashion, the book is not afraid to tackle sex and nudity. I have noted before that the earlier genre was not as fuddy-duddy as is commonly thought, and Morris just confirms this. He is also willing to write active female characters, to a degree where the most active characters in the book are the women. Walter may be a bit on the passive side though… 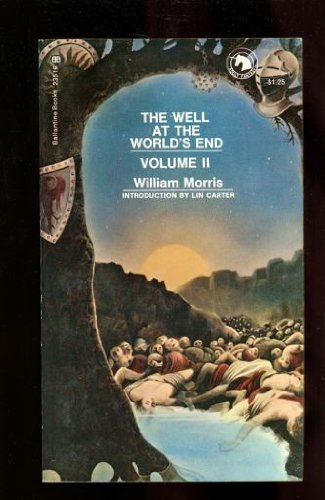 (ii) The Well at the World’s End

The Well at the World’s End is, in practically every way, a superior work to The Wood Beyond the World. There’s just one problem, namely that Morris’ prose remains every bit as clunky as before (though you rather get used to it after a while), and this book is long. As in 228,000 words – according to Lin Carter, who wrote the Introduction to my edition, The Well at the World’s End was the longest fantasy novel until the publication of The Lord of the Rings. This is why I recommend The Wood Beyond the World first, since it gives you time to acclimatise to Morris’ awkward style before you hit this hefty tome.

The Well at the World’s End is sprawling, and often episodic, and I would advise checking out Wikipedia’s synopsis to assist with plot comprehension (keeping track of things is not helped by Morris’ naming conventions for women. He loves referring to multiple characters in similar fashion). For myself, I was genuinely surprised at how dark the story is. Sure, it starts off as a fluffy fairy tale, with Ralph, the fourth son of the King of Upmeads, going adventuring for the sake of adventuring, but then we get the likes of this:

So Ralph went in company with some of the sergeants and others, and looked at this and that about the town without hindrance, save that the guard would not suffer them to pass further than the bailey of the Castle.

And for the said bailey, forsooth, they had but little stomach; for they saw thence, on the slopes of the Castle-hill, tokens of the cruel justice of the said lord; for there were men and women there, yea, and babes also, hanging on gibbets and thrust through with sharp pales, and when they asked of folk why these had suffered, they but looked at them as if astonished, and passed on without a word.

Don’t get me wrong – The Well at the World’s End is not grimdark. It’s at heart the work of a romantic idealist, but Morris is not afraid to show violence and the uglier side of his world. As Carter’s Introduction argues, this is what distinguishes Morris from the earlier dreamworlds of MacDonald — one can get oneself killed on the way to Utterbol. Also, there’s a fair bit more sex and nudity than you’d expect from a Victorian author (Ralph gets to sleep with a couple of women, one of whom he marries), as well as female character agency:

When they had broken their fast Ralph went to saddle the horses, and coming back found Ursula binding up her long hair, and she smiled on him and said: “Now we are for the road I must be an armed knight again: forsooth I unbound my hair e’en now and let my surcoat hang loose about me in token that thou wottest my secret.

Soothly, my friend, it irks me that now we have met after a long while, I must needs be clad thus graceless. But need drave me to it, and withal the occasion that was given to me to steal this gay armour from a lad at Utterbol, the nephew of the lord; who like his eme was half my lover, half my tyrant.

Of all which I will tell thee hereafter, and what wise I must needs steer betwixt stripes and kisses these last days. But now let us arm and to horse. Yet first lo you, here are some tools that in thine hands shall keep us from sheer famine: as for me I am no archer; and forsooth no man-at-arms save in seeming.”

Interestingly, C.S. Lewis loved this one, to the point where his gushing praise is used as the cover blurb for my edition, while as for J.R.R. Tolkien… there are a couple of odd little names the pop up (‘Gandolf’ and ‘Silverfax the horse’) that make one smile, even if one realises that Tolkien got the name Gandalf from the Poetic Edda, not Morris. Morris’ Gandolf is actually a villain, for what it is worth.

For me, the biggest takeaway from the book was the extremely powerful and haunting image of the Dry Tree. This was apparently a common piece of symbolism in the medieval works Morris so loved, being a straightforward representation of existence without God. Christianity is implied in The Well at the World’s End, via references to saints and monks, but it remains very much in the background, and the exact symbolism of the Dry Tree in Morris’ work – and how it contrasts with the life-giving properties of the titular Well – is really up to the reader’s interpretation. Given Morris’ own views, there are a number of possibilities.

(And, of course, the motif of a dead tree shows up in Tolkien too…). 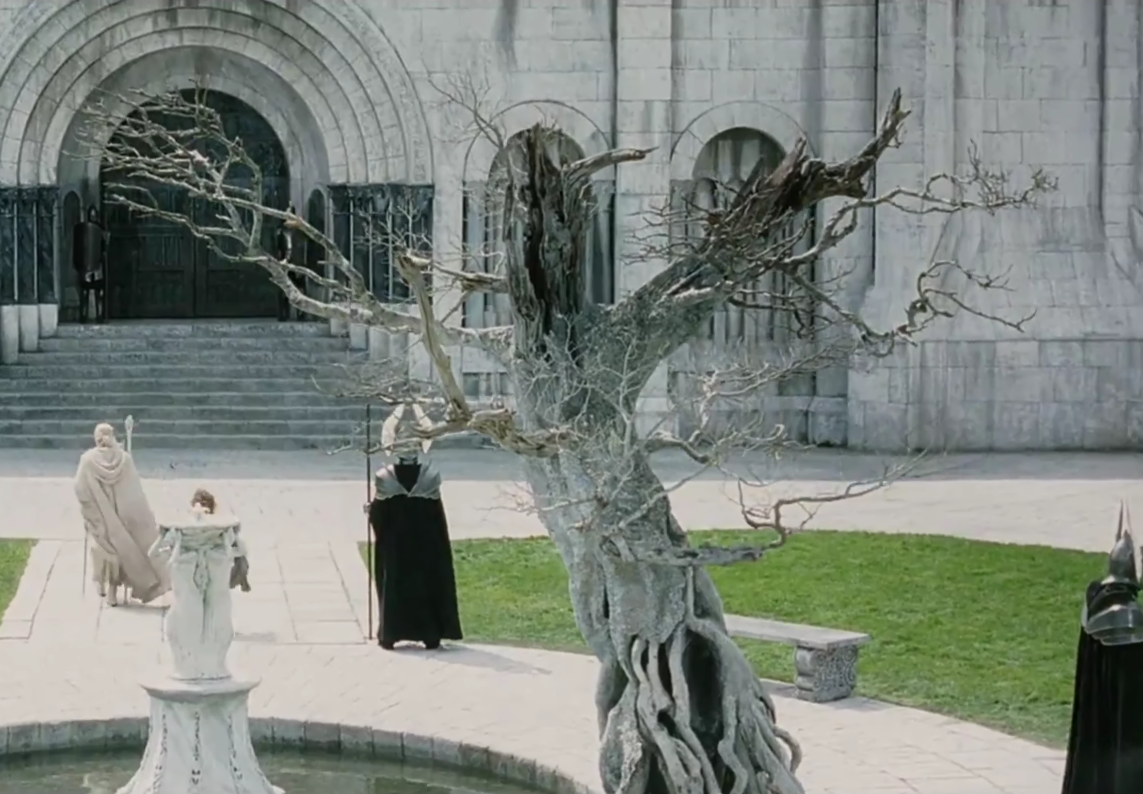 So are The Wood Beyond the World and The Well at the World’s End worth reading? In one sense, no. Morris was an inferior writer to other pre-Tolkien fantasists such as Lord Dunsany and E.R. Eddison, and his prose ensures that these works remain opaque to modern readers. Morris, like MacDonald, is arguably more interesting for who he influenced than for his works themselves (Tolkien and Lewis – Last of the Pre-Raphaelites?). On the other hand, Morris is not actually a bad author – despite his missteps, there is much to admire here, especially in his handling of female characters, and when he wants to, he can produce a memorable image with the best of them. Quite apart from the Dry Tree, Ralph and Ursula crossing the (cooled) lava-sea sticks in my mind.

Also, remember that this is where modern fantasy got going. I think those interested in the genre owe it to themselves to at least give him a go, even if neither (public domain) work is going to be adapted any time soon. Just make sure you start with the shorter work first.

6 thoughts on “A New and Better World: William Morris and the Dawn of Modern Fantasy”