Rushing In Where The Tuatha Dé Danann Fear To Tread: A Reply to Naturally Orla

October is clearly a month to live dangerously. First I tackle the Female Gandalf controversy (a controversy that has now sadly resulted in Robyn Malcolm receiving a death threat from one lunatic). Now? I’m going one better, by wading into a discussion of cultural appropriation in a fantasy context. Oh dear.

The original post was written by one Naturally Orla. Entitled Do Fantasy Writers Think Irish is Discount Elvish?, it criticises the perceived misuse of Irish mythology in a fantastical context. Specifically:

“… the problem is treating Irish and Irish culture like it only exists as a reusable fantasy product.”

Orla identifies language mangling, mash-ups of Irish myth, and various bits of demonisation and sexualisation as signs that the fantasy genre is using and abusing Irish culture.

Now, in writing a reply to this… I need to make a small-but-obvious disclaimer. Namely, I’m not Irish. Sure, my great-great-grandfather, Daniel Keenan, emigrated from Ireland to New Zealand in 1864, and there are residual bits of my life that have been shaped by that, but that’s neither here nor there. I’m a New Zealander, not an Irishman. I wouldn’t know the language if I tripped over it.

On the other hand, I am a fantasy author, with an (understandable) interest in the genre, and can talk a bit about the way source material impacts on writing. So let’s begin…

It is common to drawn on folklore for fantasy writing. Irish mythological characters and monsters have become staples of western fantasy in many ways. Mainstream concepts of “fairies” are often some mash-up between English, Irish and Scottish folklore traditions, all of which are different. The fairy courts, Titania and Oberon, Pixies and Brownies, Seelie and Unseelie are all part of English and Scottish traditions. The Morrigan, Ring Forts, the Sidhe, Leprechauns and Banshees all come from the Irish.

… This is not a problem alone, but they are usually removed from all context and multiple cultures are used as inter-changeable for each other.

Yes, fantasy frequently mashes together disparate traditions into a hodge-podge. I am not sure why this mashing together need commented on, let alone disparaged. C.S. Lewis’ Narnia books? They’ve got Greek Dryads, Roman Fauns, Norse stone giants, an entire book (Voyage of the Dawntreader) that amounts to Lewis’ version of the Irish Immram stories, plus a cameo with Father Christmas, and the odd reference to Shakespeare. And the entire thing is absolutely drenched in Christianity. Lewis used and abused real-world traditions, borrowing and stealing in order to write his own story… and whatever one might say about Narnia, its eclectic nature is not normally the target of criticism.

J.R.R. Tolkien – who did actually grumble a bit about Lewis here – engages in his own little myth-mashups. The Children of Húrin marries Norse Sigurd and Finnish Kullervo, and in one sense, the underlying narrative of The Silmarillion is a lengthy explanation for how (Finnish-inspired) Quenya and (Welsh-inspired) Sindarin came to be linguistically separated. Plus there’s the Neoplatonic influence from the Classical World. Tolkien is less haphazard in throwing together motifs and ideas than Lewis, but he does it, because that is what fantasy is and has always been… a borrowing and a re-working. Tolkien himself compares story to a Cauldron of Soup – a jumble of disparate ingredients, and mixed together to create something new.

Orla’s essay would disparage such mixing-and-matching as disrespectful and inaccurate – treating different traditions as interchangeable. But, with the greatest respect to Orla, mixing stories is what creates stories. Those aforementioned Irish Immram stories were themselves hijacked by Christianity, eventually resulting the incredibly popular (in medieval times) Voyage of Saint Brendan tale. If there is a genuine fault to be identified here, I would suggest it is less about fantasy authors mixing together English, Irish, and Scottish traditions, and more about them doing so in a manner that feels unoriginal or just plain bad. But that is a different criticism from the one Orla makes – it is one thing to complain that the soup is bad, but another to complain that the soup ought not to have been made at all.

Even when Irish mythological characters are used in their right, they are portrayed as either demonic or highly sexualised. The sexualisation of female figures taken from Irish mythology is a continuous trope. Versions of the Morrigan and Maebh are usually seen to be evil seductresses.

Orla has obviously read far more Irish mythology than I, but even in the material I have read, there is a very strong sexual component. Cú Chulainn – among others – is positively notorious. Don’t get me wrong – I am no fan of the Female Seductress trope, and think it lazy and problematic writing at the character level, but complaining about the mythological connotations strikes me as an odd way of approaching the issue.

This is not exclusive to fiction. Dungeons & Dragons, an iconic fantasy gaming product, takes a range of Irish mythological creatures and then makes them nearly all evil aligned. Not all hags have their origin in Irish and Scottish folklore, but the Bheur Hag definitely references the Hag of Beara and is also evil. There’s something uncomfortable about an important Irish mythological figure being reskinned as an evil creature that specifically tries to starve people to death.

It would be handy if Orla could provide some other examples of these Irish mythological creatures being turned into D&D Evil Monsters. I mean, D&D has the Banshee, but, well, that is hardly a lovable figure in the folklore either. As for hags, they do have a place in other traditions, where they generally have a sinister reputation (they, unsurprisingly, turn up in Narnia too). The cited example? Sure, I will concede the point – having an ‘Irish’-flavoured starvation monster is indeed a bit on the nose.

It is common for colonised cultures to be portrayed as demonic and hyper-sexual. This is used to present the culture of the colonised people as savage and in need of the civilising influence of imperialism. Similarly, when all the different cultures of the “British Isles” (a gross imperialist term that most Irish people never use) are just thrown together in a big mess it is reinforcing colonial erasure.

Now this is an extraordinary leap. Mixing of human cultures is something that happens. Often it is the historical result of imperialism – but that cannot be undone, any more than we can turn back the clock to some imagined (and romanticised) past, and once cultures interact, they will inherently feed off and modify each other. The fantasy genre is just one very small facet of that, and if Orla and like-minded people are concerned with the direction the genre is taking, by all means, I encourage them to pick up their pens, and produce their own contribution. As it is… did the Voyage of Saint Brendan – written in Latin, featuring Judas, and overtly Christian, but using the Immram framework – erase earlier Irish culture, or did it constitute a cultural synthesis, a merging of old and new? 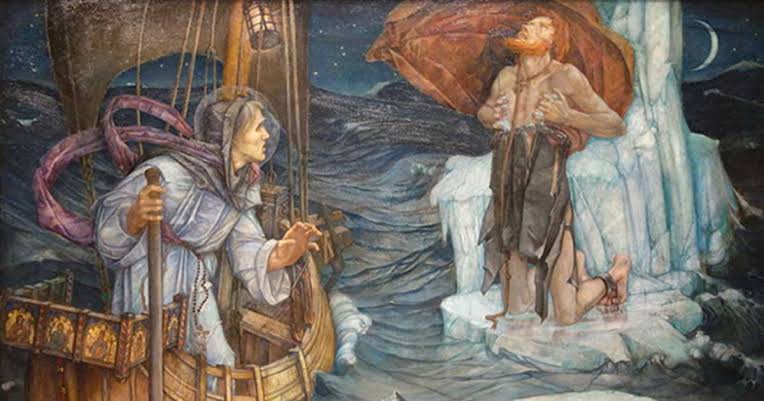 Another way colonialism disrupts cultures is through the destruction and devaluing of their languages. The Irish language could not be used on birth certificates or any official documents under British rule despite it being the primary language spoken by the majority of the country until the 19th century. Other colonialised populations, in the Americas or Australia, had similar experiences of imperialism. In some countries their native languages were banned outright.

On this particular point I do agree. Linguistic mixing is natural, but language suppression is something else (it happened here in New Zealand too, though Maori is currently undergoing a renaissance). I am, however, extremely sceptical of Orla drawing parallels between such suppression and run-of-the-mill mangling.

Coming back to Dungeons & Dragons, the language of Sylvan, the Fey language of D&D, is strongly based off Irish, though with an English alphabet which Irish does not use. Here’s some flavour text for a Darkling, a fey monster, which uses the correct word for dark/black Dubh (dove) but uses the word Catha, meaning battle-ready or warlike, for crow. The author likely made this mistake because of the Irish goddess Badb Catha, the war crow, but Badb is the old Irish word for crow not Catha. Showing that author did not check the words separate from each other. A small mistake that might seem petty to point out. But it’s so small it would have taken 30 seconds to type into Google or a dictionary. There are plenty of native speakers online to ask.

I think Orla sets the bar too high here. For a start, the language is “based” off Irish. This would imply that it is not supposed to be literal Irish. “Basing” names and flavour-text off real-world analogies is nearly universal in the fantasy genre – as writers we often want a consistent linguistic aesthetic. On the other hand, very few of us have a Tolkienian ability to formulate an entire language for ourselves, while we might not want to invoke the connotations that come from using a literal real-world language. I myself have bits and pieces of mangled Finnish in the names of the Viiminian Empire, with various fantastical modifications, especially insertions of ‘h’ at various points. I do this (deliberate) mangling because I want to avoid implying that the Empire is Finland – it obviously isn’t – but I do want a particular aesthetic with the names, one that is distinct from those of the Skeevereet Principality. Plus, seeing as I do use actual Maori names like pohutukawa and weta, I rather have to mangle everything else.

Basically, this is not some malign plan of linguistic imperialism. It may or may not be laziness on the part of creator, but Orla never stops to consider that the writer(s) may be consciously avoiding a one-to-one correspondence between fantasy and reality.

Warhammer 40k, a longstanding game universe, uses Irish almost unchanged as it’s space-mystic Eldar language. While the Irish there is more accurate, this isn’t much better. Why are these aliens in an entirely fictional setting speaking Irish, a real language?

Excellent question… which might explain why other creators use pseudo-Irish, rather than real Irish. On the other hand, Orla disagrees with use of pseudo-Irish, so does that mean all writers have to be Tolkien, or else serve up randomised gobbledygook? As I have said, this is simply too high a bar. We are fantasy writers, but not necessarily skilled linguists or philologists.

Ultimately the issue is not the inclusion of Irish or Irish folklore in fantasy, the problem is treating Irish and Irish culture like it only exists as a reusable fantasy product.

If Orla were expressing concern that Irish folklore is being treated as an “off the shelf” means of writing fantasy, I would agree. There is indeed something vaguely banal about a fantasy writer who thinks “for extra Elvish flavour… just add Celtic Tropes!” And I do agree with Orla that one ought to think about what one is writing (easier said than done, however – it is surprisingly easy to “miss” a connotation until it is much too late, and I suspect the earlier-cited starvation monster is just such an example). Where I disagree with the essay is that it frowns far too much on the mixing of traditions, without which we would have no stories, and the linguistic issues that come with writing fantasy. Reading in colonialist scheming to erase culture is simply a bridge too far.

3 thoughts on “Rushing In Where The Tuatha Dé Danann Fear To Tread: A Reply to Naturally Orla”