Not Leaving Well Enough Alone: The Return of Blackadder?

If you heard a loud “Noooooo!!!” off in the distance recently, chances are that was me, reacting to the news of a fifth Blackadder series.

To be fair, my immediate reaction on seeing the article was to check the date. Nope, not 1st April. 1st July, depressingly enough. Apparently the original source is The Sun, which renders it of still questionable veracity, but to see the New Zealand Herald pick up the story gives it some credence (on the other hand, the Penguin cheerfully cites the Daily Mail without irony. Maybe some New Zealanders just don’t understand how the British newspaper system works?). 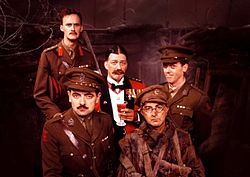 Having had some time to digest the news, I have decided that I am not against a fifth series in principle. There is, after all, plenty of scope for exploring Blackadder’s trademark black comedy in a post-1917 setting, whether it be in the context of Second World War, the Cold War, or during the dying days of British colonialism. The problem is, the closer it gets to the modern day, the less the Blackadder formula works – at its heart, it is a piss-take of Britain’s historical narratives, with part of the fun being the allusions to events and characters from another age, and seeing shadowy resonances with our own. There’s a safety in history too – events outside living memory can be mined for bad-taste comedy without stirring up half your audience, or (ironically) making them feel dated. Jokes about Elizabeth I are, in a sense, timeless, precisely because none of us can remember her. Jokes about Margaret Thatcher less so.

The danger is that a fifth series, apparently focused on the modern day, with Blackadder as a university lecturer, goes against what made the original four series so great and so special. No history to explore, or deconstruct? What’s the point – snarky contemporary sitcoms are a dime a dozen. Plus, there’s less sense of “secondary world” immersion to be found here. One of the big weaknesses of Back and Forth (1999) is that it did not give the historical episodes time to breathe – we never got a chance to truly meet the character incarnations before rushing off to a different time. Sure, a full fifth series will give us immersion… but it will be immersion in “our” world, and “our” time, rather than the alien-yet-familiar weirdness of Medieval, Tudor, Regency, and early twentieth century Blackadder.

There’s another problem too. The ending to Blackadder Goes Forth (1989) remains a monumentally powerful bit of television. Following on after that is a tough ask, which is another reason Back and Forth didn’t work (and why I like to pretend it never happened). Why on earth should a fifth Blackadder series, shorn of what made its predecessors so unique, come across as anything other than a weak little epilogue to twenty-four episodes of solid gold? At some point, one ought to leave well enough alone, and while I will still watch the fifth series if or when it comes out, I do not have my hopes up.