Much Ado About Ras Morthil: The Amazon TV series and Unfinished Tales

As of last May, it seemed clear that the upcoming Middle-earth prequel series was going to concern Young Aragorn. There was a fair amount of rolled eyes at the prospect, since there just isn’t enough pre-Rings Aragorn material to support five seasons of television. Certainly not five seasons of epic stakes television – my own suggestion was something more sword-and-sorcery based, with an episodic series of adventures as our protagonist wanders Middle-earth.

Things have become a bit more interesting on that front in the last few days. While there has been no formal announcement that Amazon is ditching the Young Aragorn idea, there have been certain hints that something else might be in the works. And that something – if you will excuse a speculative tangent – might imply something very interesting about future Tolkienian adaptations. Suffice to say, this is a very speculative blog post.

Consider the maps that have been drip-fed on Twitter over the last couple of weeks: 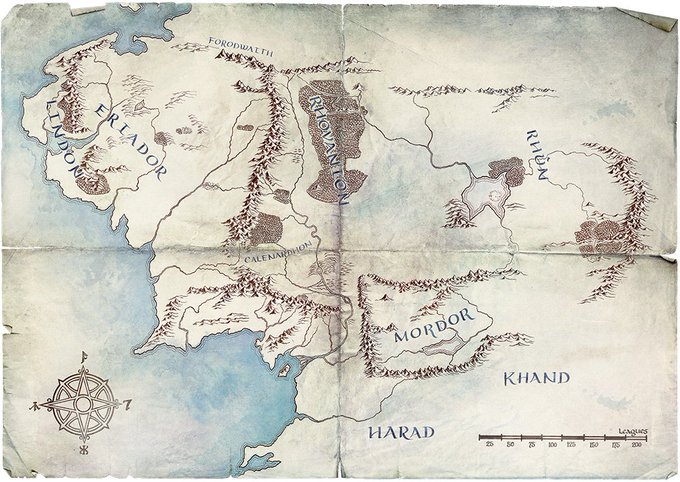 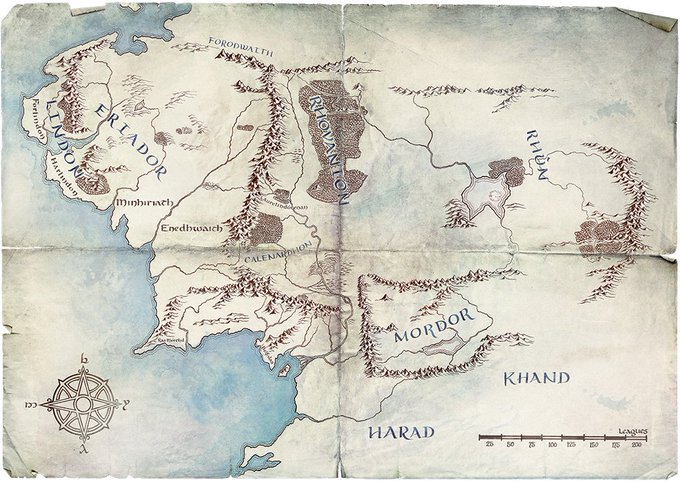 For a larger version, see here.

Now, the Twitter updates are being drip-fed at gaps of 3, 7, and presumably 9 days apart, with references to the 3, 7, and 9 Rings from the Ring Verse. This potentially points to a much greater emphasis on the Rings of Power than previously thought – which suggests that we might be looking at Celebrimbor and Sauron as subject matter, rather than Aragorn. Hold that thought for a moment.

The first map is blank, but the second references Calenardhon. This was the old name for the region that became Rohan, before Eorl the Young and Cirion the Steward reached their deal in T.A. 2510. This has naturally led to speculation that the series might be set well before Aragorn’s birth. Rohan had been established for some four hundred and twenty years by that point.

Also, while a summarised version of the Eorl/Cirion situation is given in the appendices to The Lord of the Rings (which Amazon does have the rights to), a full version of the story is found in Unfinished Tales… which remains (so far as we know) under lock and key. Again, hold that thought.

It’s the third map, released a couple of days ago, that really suggests something very interesting is going on. Note the continued absence of references to Gondor and Arnor, creatures of the the Third Age. Instead we get Laurelindórenan, the old name of Lothlórien. Very… Second Age, if you get my drift, and I did notice that the map’s compass switched to Tengwar, the Elvish writing script. The One Ring’s inscription is in Tengwar, while the Second Age saw its forging. Celebrimbor’s story is summarised in The Lord of the Rings, but it has more detail provided in Unfinished Tales.

Furthermore, the map also references the mountain of Ras Morthil, located at the end of the cape of Andrast, in south-west Gondor. Recall that Ras Morthil was not included in the map of the Jacksonian Rings adaption. It first appeared in Middle-earth maps, not with The Lord of the Rings in 1954-1955 (which Peter Jackson had the rights to), but with Unfinished Tales in 1980 (which he did not). Ras Morthil’s significance – as a long-time home of the Druédain (aka the Woses) – is only mentioned in Unfinished Tales.

I think you can see what I am getting at. Maybe, just maybe, Amazon has got its hands on the rights to Unfinished Tales (or at least it has negotiated partial usage of the material). If so, the consequences for future Tolkienian adaptations are staggering. There is copious material in that book pertaining to Númenor – also Second Age – as well as two of the major First Age stories, the tale of Túrin, and Tuor’s arrival at Gondolin (though not the Fall itself). Even if this adaption does not go there, the winds of change are definitely blowing.

But, wait… what of the Tolkien Estate? Christopher Tolkien famously hates the Jackson movies, and resolutely refuses to sell any additional material. Well, Christopher Tolkien resigned as Estate director in August 2017… and to judge by a certain February 2019 interview with Amazon Studios Chief Jennifer Salke, the current Estate leadership seems rather more open to adaptions:

Could you ever foresee Amazon doing a mega franchise, like, if, say, the Bond franchise were to become available?

Totally. I mean, look at Lord of the Rings. We get behind a franchise in a major way. The Tolkiens are coming to New York, all those estate holders. The older ladies, who are now, I think, in their 80s and 90s. His daughters and the grandchildren, they’re coming to New York, and Jeff Bezos, me, Jeff Blackburn, a team of us are going and they’ve invited us to a dinner and see some art, some creative work that they haven’t shown the world yet.

Priscilla Tolkien (Christopher’s younger sister) also has a track record of being more adaption friendly, having met with Ralph Bakshi before his 1978 version.

Anyway, back to the maps… is there anything else that would point to a Second Age setting? Well, there are no forests shown in Enedwaith – the area was logged heavily by the Númenoreans for ship-buiding purposes – so the second half of the Second Age seems more likely. The forging of the Rings, the War of the Elves and Sauron, the corruption of Númenor… all these are possibilities from that time, and all have the potential for some genuinely interesting material for adaptation. The Second Age has its charms – and quite apart from the focus on Rings, late era Númenor would actually be a rare chance to portray a genuinely decadent Tolkienian civilisation. Vicious royal politics, Satanic worship… what’s not to love? We will find out more when the time comes, but fingers crossed we get this, rather than Young Aragorn.

If it is the Second Age, however, there is one error in the above maps – the coastline. As per The Peoples of Middle-earth, the Downfall of Númenor caused some chaos to the Belfalas area, and the above map is clearly post-Downfall (see here for someone’s speculative maps on the First and Second Ages). On the other hand, Amazon clearly don’t have the rights to The Peoples of Middle-earth, or any of The History of Middle-earth series. If they did, they wouldn’t be adapting Celebrimbor – they would be running amok with The New Shadow. So it’s an error they have to make.

4 thoughts on “Much Ado About Ras Morthil: The Amazon TV series and Unfinished Tales”