So It Is Young Aragorn 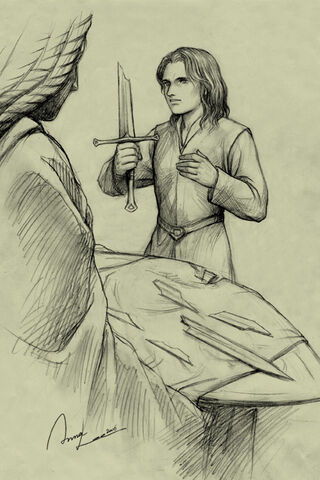 Some of the mystery surrounding Amazon’s upcoming Middle-earth television series has been cleared up – we’re not looking at Rings on TV or some First or Second Age material (grumble, grumble). Rather, we’re looking at the Adventures of Young Aragorn.

To clarify, there’s the following material to work with:

I suppose this could work, assuming that the Aragorn arc is purely a one season thing. The difficulty is resisting the temptation to hike the stakes into melodrama territory (this is not Fate of the World stuff). Something more sword-and-sorcery flavoured and low-key would be preferable over a more epic treatment. There’s some potential for an interesting Aragorn/Denethor rivalry too, though I’m not holding my breath for a favourable treatment of the latter, since he’ll potentially be one of the season’s major antagonists. Very likely, it’ll be yet another character assassination of one of Tolkien’s most underrated creations – would it be too much to ask for Denethor to be portrayed as competent?

I also think if Amazon’s after its very own Game of Thrones, it’s barking up the wrong White Tree here. There’s a story in there somewhere, but it lacks the scope of Rings or even The Hobbit. Unless they go full fanfiction with invented characters, no-one significant is going to die, and they can’t very well give Aragorn additional love interests, since, well, he already has Arwen. If there’s a manufactured love triangle with Random Gondorian Woman, I am going to scream very loudly – if they wanted Thrones-style sexual content, they would have been better off doing a decadent interpretation of Númenor or something. Or better yet, they could have adapted another series altogether.

One thought on “So It Is Young Aragorn”